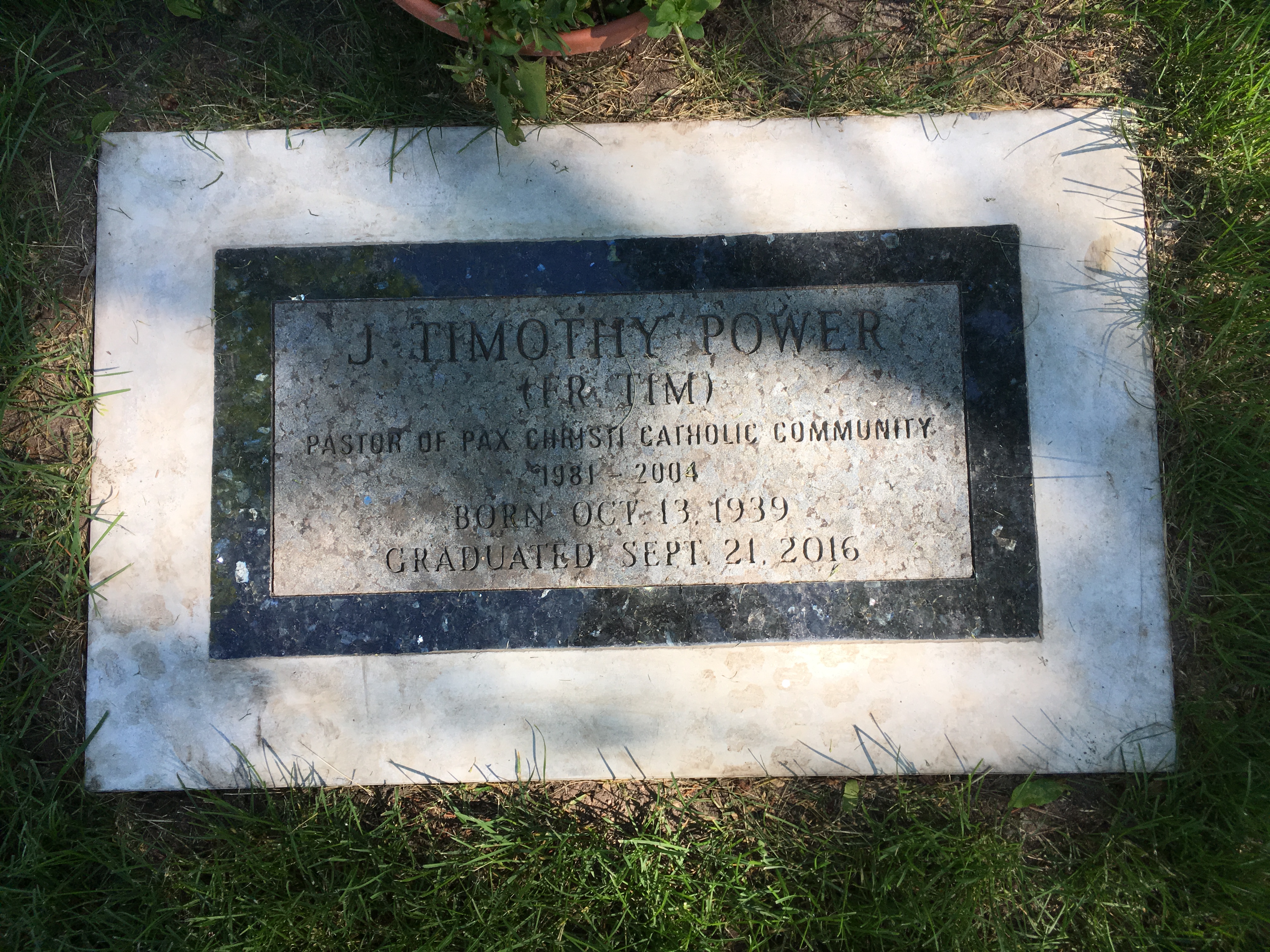 Fr. Tim Power was a Catholic priest and pastor of Pax Christi Catholic Church from 1981-2004. My pastor, to be specific. When friends mentioned that Fr. Tim’s headstone had been placed, I wanted to visit.

The timing, Memorial Day weekend, meant I had plenty of company. The small community cemetery next to Pax Christi already had a handful of people with watering cans. At first I assumed they were there to visit a loved one; then I noticed that they were watering flowers as they walked from grave to grave.

I walked too, row by row, looking for Tim’s headstone. I hadn’t remembered exactly where he’d been buried last fall and so I walked, looking at each headstone for Power. After a tour of the cemetery, I realized even though I’d been told his headstone was placed, that Tim Power was not a headstone kind of guy.  He would have opted for a flat gravestone marker, also known as a grass marker. These are a little trickier to spot, but so was Tim’s style.

When I found the gravestone, it read,

While many people might find the most surprising word on the gravestone to be “graduated,” a word Tim insisted on, it is the word community that I believe resonates most with his life and legacy.

Tim led collaboratively. Power can be used many ways, and Tim chose to use power with others rather than over others. It might seem a small point, but for many of us at Pax Christi, the way Tim used power formed and empowered us to minister in ways we had not imagined before we met him.

In the months since Tim’s death, I have been at a number of dinners where everyone at the table knows they are in ministry because of Fr. Tim Power. All of us became more engaged because Tim created space.  He believed that we are called as community to live our faith, and that each one of us has a ministry to live out.

I was overwhelmed with deep gratitude for a man who helped form my life, and I knew I was standing on sacred ground. To quote John F Kennedy, whose 100th birthday was Memorial Day, “As we express our gratitude, we must never forget that the highest appreciation is not to utter words, but to live by them.”

This year, I need Advent in my life