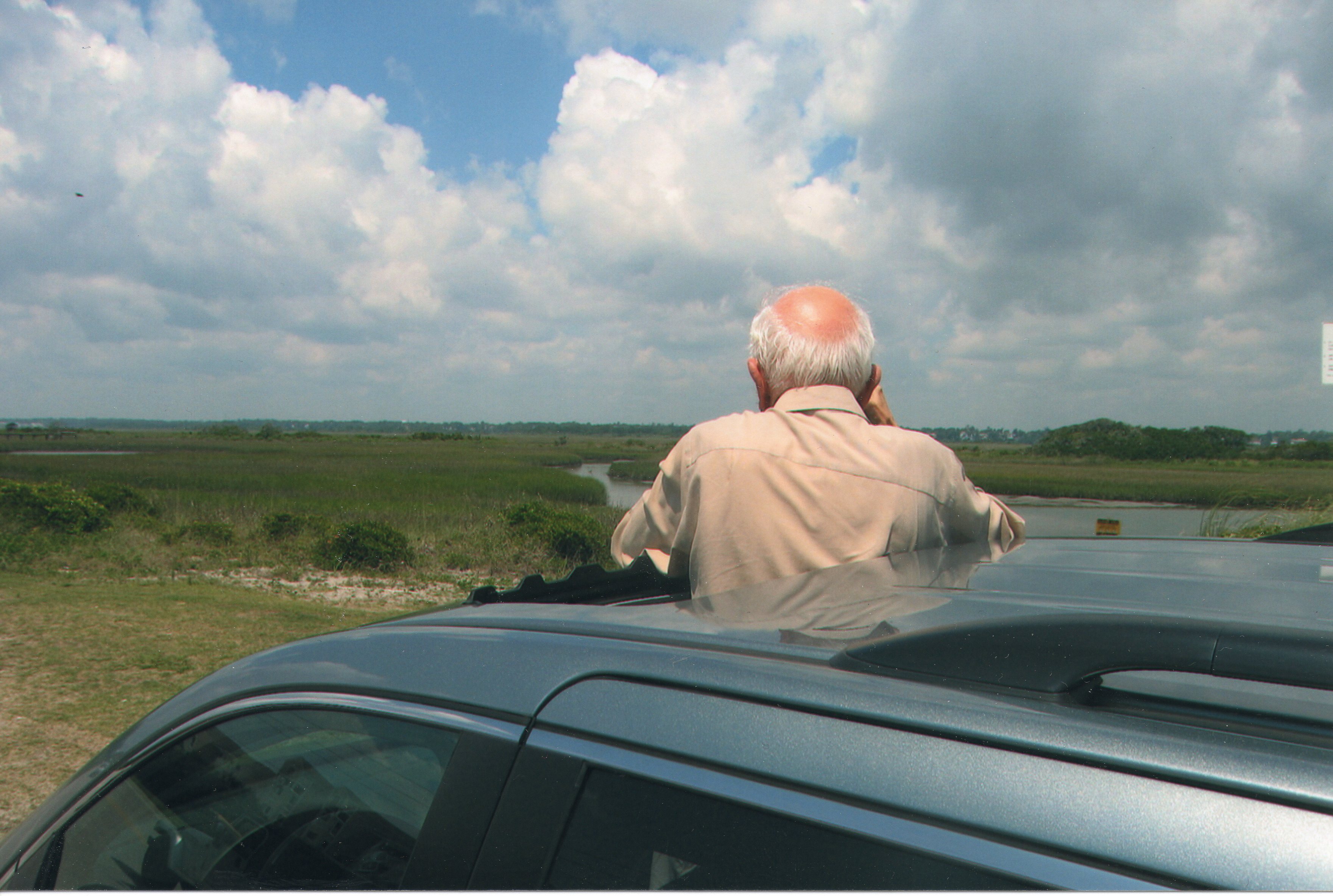 One of my last sweet memories of my dad is of him poking out of my van’s skylight with his camera. He was working on a painting of a salt marsh, and he wanted me to drive him out to the coast to take photos. This was not as big a trick as it sounds; he lived in North Carolina, a few hours from the coast. He was also dying of cancer, and I wanted to make this road trip with him while he could still enjoy the view, take pictures, and then go home and paint. I pulled the van off the road for a perfect view of the salt marsh, and dad, wanting some perspective on the marsh, contorted his 89 year old body through the van skylight. Standing on the car seat, he managed to get half his body above the van’ roof. Stepping back to get the perfect perspective, I snapped a photo with my phone of dad and his Nikon with an enormous telephoto lens, poking out of the skylight.

Some objects in our lives take on special meaning. That van is one of them. The van was not just any van. My dad had driven vans most of his life, but this van was different. This van was one I’d helped him select. It was the same model as my van, and when he bought it he loved it. Shortly before he died and was no longer driving, he gave me the van.

It’s been five years since my dad’s death. I’d decided this was the year; I would not drive the van through one more Minnesota winter. True to my word, I bought a new car in early September, one that I hope will be more snow-worthy. It’s been sitting in my garage for the last two months. I’ve been driving the van.

You’d think with a new car taking up garage space that I’d be more eager to sell the van. But I was holding off, not quite ready to let go of the van that held my last sweet memories of that coastal trip with my dad. Then the first snow came, and suddenly, I was ready.

My husband placed the ad online late Thursday evening.  Friday afternoon, we got a text from a potential buyer.  We met them halfway between their home and ours.  They had collided with a deer on Halloween.  Everyone was ok, but they needed a new van.  Their previous van had been owned by a family that had inherited their van from the wife’s parents, a couple who lived down south.  They had two children and plans for a third.  They could have been us, 25 years ago.  The bill of sale codified a transfer that seemed in the natural order of things.

You could say this was all random chance.  I think of it more like the love that interconnects us all, managing the universe by lining up the cherries on Craiglist’s slot machine for buying and selling cars.  We intuit the actions of this love mostly in hindsight, which may cause skeptics to conclude that these experiences are a fallacy or wishful thinking about the order of the universe. But I believe we can open ourselves to loving interconnections proactively by shifting our perspective, just like my dad shifted his visual perspective that day at the salt marsh.  I believe that shift requires slowing down enough to pay attention to micro-movements of emotion and experience, and to make a series of small, loving decisions that open our lives into those of others.  My faith tells me these openings are a manifestation of the Holy Spirit.

None of these openings are pre-ordained.  Feelings of connection nudge me, like the passing dream that Mary Oliver describes in “The Night Traveler:”

… All night – and all your life, if you are willing—

It will nuzzle your face, cold nosed …

My dad was an analytical man, and he lived much of his life working with numbers and logic.  I don’t know what he would have made of this rumination about chains of events we can’t trace to their roots.  But I wonder if what I’m seeing in hindsight are the patterns which inform our lives and relationships.

The English novelist Mark Haddon says, “Prime numbers are what are left when you have taken all the patterns away. I think prime numbers are like life. They are very logical, but you could never work out the rules, even if you spent all your time thinking about them.”

All your life, if you’re willing, you could spend connecting the primes, and it would not be a wasted life.

Rebuilding after loss in Syria